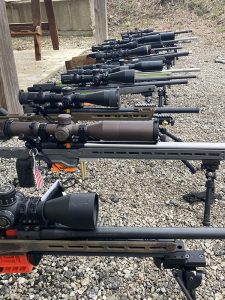 What is it? NRL22 is a shooting sport designed around precision rifles shooting .22LR rimfire ammunition, typically out to 100 yards, although sometimes further. Each match is broken down into stages, with each stage typically consisting of 10 shots on targets ranging from 1/4″ up to 6″. There are different positions you’ll need to shoot from, like standing, prone, kneeling, and shooting off of different barricades like a tank-trap or a bucket. Official NRL22 matches consist of 5 stages, but our outlaw matches right now are running 3-4. We plan on hosting outlaw matches until the 2022 NRL22 season starts in June. Stages usually have a par-time of 2 minutes that a shooter can’t go over, but some stages will have a “fastest time wins” aspect to them. 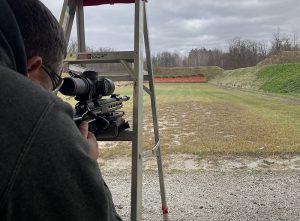 What equipment do I need to play? A .22LR rifle and ammunition. Any rifle will work, but ones with detachable magazines and scopes are best. 10/22 Ruger rifles and any bolt action is the most commonly found rifle. Scopes are highly recommended as some targets are far and small. Most shooters equip a bipod for some positions, but shooting bags are also very useful. Tripods and shooting sticks are not allowed. There are currently 2 different divisions that a rifle may fall into, depending on the MSRP of the rifle/scope combination, or any modifications that might be done to it. Your rifle division doesn’t affect the course of fire or score, but it does group you into a group of similar rifles to “compete” against. 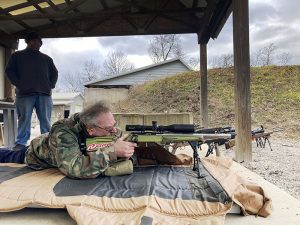 When do we shoot? During the winter 2021/2022 months we meet on the second Saturday of each month, until the 2022 NRL22 season starts up in June of 2022. Those dates will probably change to a Sunday once the season gets started. All of our matches will be posted on http://www.practiscore.com with updated start times, stage descriptions, round counts, and any other pertinent information. Results will also be available on Practiscore after the match has been completed.

Where can I find more information? www.nrl22.org is a good place to start, as well as looking at videos on YouTube. Additionally, you can show up to one of our matches and watch and ask questions, or email us at eccl.nrl22@yahoo.com.    Below is a really good video to get started learning about NRL22.